The A Sparrow in Terezin

will be releasing on 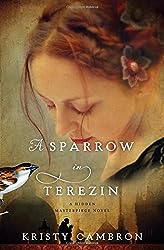 April 7th. Here is a a description from Amazon:

“Bound together across time, two women will discover a powerful connection through one survivor’s story of hope in the darkest days of a war-torn world.

Present Day—With the grand opening of her new art gallery and a fairytale wedding just around the corner, Sera James feels she’s stumbled into a charmed life—until a brutal legal battle against fiancé William Hanover threatens to destroy the perfectly planned future she’s planned before it even begins. Now, after an eleventh-hour wedding ceremony and a callous arrest, William faces a decade in prison for a crime he never committed, and Sera must battle the scathing accusations that threaten her family and any hope for a future.

1942—Kája Makovsky narrowly escaped occupied Prague in 1939, and was forced to leave her half-Jewish family behind. Now a reporter for the Daily Telegraph in England, Kája discovers the terror has followed her across the Channel in the shadowy form of the London Blitz. When she learns Jews are being exterminated by the thousands on the continent, Kája has no choice but to return to her mother city, risking her life to smuggle her family to freedom and peace.

Connecting across a century through one little girl, a Holocaust survivor with a foot in each world, these two women will discover a kinship that springs even in the darkest of times. In this tale of hope and survival, Sera and Kája must cling to the faith that sustains and fight to protect all they hold dear—even if it means placing their own futures on the line.” 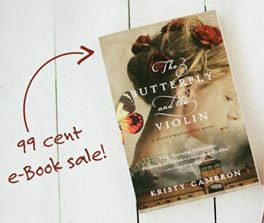 The Sparrow in Terezin is the second book in A Hidden Masterpiece Novel series. And, you guess it! It’s on sale for .99¢!!! So, hurry and snatch this up so you are ready for her new book in a month and a half! Books are rarely this cheap.

So, hurry and pick up The Butterfly and the Violin

while it’s still .99¢ This book has VERY good reviews on Amazon.

I would recommend you pick it up because there may, or may not (; be a giveaway when I review her new book and you’ll want to be caught up!!!

Here is what Amazon has to say about the book:

A Mysterious painting breathes hope and beauty into the darkest corners of Auschwitz–and the loneliest hearts of Manhattan.
Manhattan art dealer Sera James watched her world crumble at the altar two years ago, and her heart is still fragile. Her desire fordistraction reignites a passion for a mysterious portrait she first saw as a younggirl–a painting of a young violinist with piercing blue eyes.
In her search for the painting, Sera crosses paths withWilliam Hanover–the grandson of a wealthy California real estate mogul–who maybe the key to uncovering the hidden masterpiece. Together Sera and Williamslowly unravel the story behind the painting’s subject: Austrian violinistAdele Von Bron.

A darling of the Austrian aristocracy of 1942, talented violinist, and daughter to a high-ranking member of the Third Reich, Adele risks everything when she begins smuggling Jews out of Vienna. In a heartbeat, her life of prosperity and privilege dissolves into a world of starvation and barbed wire.

As Sera untangles the secrets behind the painting, she finds beauty in the most unlikely of places: the grim camps of Auschwitz and the inner recesses of her own troubled heart.