Hey, guys! I want to give you an update on my exciting projects. As most of you know, I have been working as a playwright and enjoying every moment of it! It’s been such an answer to prayer as I am able to still do this when I am not feeling well.

A year ago, I was approached by the LEAH group in Pennsylvania and New York. They asked if I could write a play based around the founding of our nation and with the theme of freedom – both in life and in God. As an avid history buff, I was more than excited to jump in.

I was able to write the play and be part of an amazing experience. In November, I went to New York to help with the casting. It was so much fun to see these kids just jump in and become part of a world I had created in my head! So surreal.

Opening night was April 27, 2018 and I was not sure if I was going to make it. As you know, I haven’t been well and I was mostly confined to bed rest over the last 6 months. As always, God is good and I was able to get some answers and make it up there!

I decided to set the story in Boston as the tensions were rising. It centers around a group of friends as they make big life decisions. Which side is the right side and what are the reasons for choosing? What does God want? It was a tough time and I can’t even imagine going through it! It gave everyone a lot to think about – for sure!

I wanted to share some pics with you from my time up there! Hope you enjoy!! 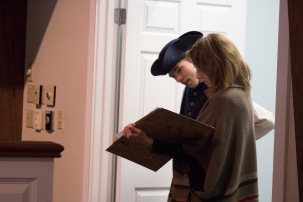 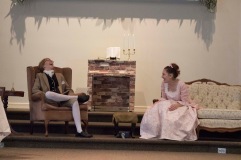 There are hundreds of pictures and I can’t possibly choose my favorites! I am just so proud of what they did. God used it in such an awesome way and I’m really thankful I was able to be a part of it.

I’m currently workin on their next project and can’t wait to share more with you! For now, here is a scene from Finding Freedom and I hope you enjoy it!

(Set: outside in a field as the boys are walking home from hunting together)

Malachi: (laughing…) And did you see Titus tryin’ to chase that coon and fall flat on his ear?

Titus: Now hold on there a minute! ‘Twasn’t my fault there was a tree stump in the way! I reckon I gave that coon more than he bargained for though when I came flyin’ face first right at ‘im and even managed to get a shot off…

Adam: Truly? “Get a shot off’?” I am fairly certain you misfired and could have killed any one of us out there just because you fell on your face and lost all control! I sure wish Emeline could have seen you then!

(Laughter continues as they all speak over each other)

Malachi: (Malachi stops and puts his hands on his knees to catch his breath and they all stop) Look at us. (Pauses to look up with a crooked grin) I’m gonna miss this! Tomorrow, everything changes for us.

(The boys nod in agreement – still catching their breath. Malachi straightens back up.)

Malachi: Sure will be different…

Adam: Yeah, well you went and got yourself that fancy internship with none other than Mr. John Adams! You didn’t think that would be all coon hunts and dodging Titus’ bullets, did ya? (Said with a smirk)

Malachi: Blood and ‘ounds! I thought I might lose an eye today! ‘Tis best I be moving on to the law! (He tries not to grin and looks innocently up at Titus)

Titus: (Punches Malachi on the arm and starts for Adam as they are all laughing) I’ll have you know that I wouldn’t waste a bullet on either of you clods! I’m savin’ those for the redcoats.

Malachi: (gets serious) Alas, Titus, do tell us about this meeting you are attending tonight. I hear that Mr. Samuel Adams may be in attendance! Some say that he can be a dangerous fellow – always stirring up trouble.

Titus: (becomes more and more angry as he says) Dangerous? Do come on, Malachi. We live in dangerous times. Our own homes and shops are subject to the king’s royal army at their whim. What rights do we now have? ‘Tis as if we are the King George’s unwanted stepchildren and he hopes to punish us for the crimes of others.

Malachi: But we are only paying taxes to cover the war not long ago fought on our own soil. The king protected us from the French and the Indians and ‘twas a costly war.

Titus: (barely containing his anger) They invaded Boston, Malachi! ‘Tis not past wars I dwell on, but what is on our soil at this very moment! British soldiers are here, taking up residence and extending curfews as if we were their children! They tell us when we can eat and sleep and what we can buy! (He spits to the side)

Malachi: (Looks at Adam and asks) And are these your feelings as well? (Titus also looks up to see Adam’s response.)

Adam: (Adam is very uncomfortable and fidgeting) I thought I might tag along with him, Mal. It can’t hurt to see what they are saying. They call themselves the Sons of Liberty and believe that we should not be governed by a foreign power and that we should rule ourselves. (He kicks at the dirt seemingly lost in thought.)

Malachi: And where is this meeting?

Adam: Under the Liberty Tree.

Titus: Nay, Adam. ‘Tis been moved to The Green Dragon Tavern as a storm looks to be a-brewin’.

Malachi: Aye! A storm is brewing, indeed! Did you not hear what the “Sons of Liberty” did to Mr. Andrew Oliver at that said “Liberty Tree”? They hung a man that was just doing his duty to King and country! They then proceeded to walk upon his dead carcass and burn him as if his body had been not defiled enough! (He pauses.) Are we, ourselves, not British citizens? (Malachi remains calm as if curious of his friends’ feelings on the subject, yet concerned for their welfare. Titus is visibly growing agitated and angry. Adam feels very uncomfortable.)

Adam: ’Tis just a meeting, Malachi. As Titus said, ‘tis not at the Liberty Tree, so you need have no fear on that account. I only wish to know what is being done in my own city. We have lost so many of our freedoms these weeks past. Julia says that soldiers come into Emeline’s family store and take what they please without regard to coin. How is it that she is to be paid when her employers are not compensated for their wares? ‘Tis a trying time, Malachi, and I, for one, shan’t turn a blind eye. I must at least have knowledge of what is taking place all around us.

Titus: (looked up when Adam mentioned Emeline and looks angrily at Malachi as if it is somehow his fault.)

Malachi: Can we not find a peaceful way to deal with the situation at hand? (He looks back and forth) Truly?

Titus: (Spits to the side) I’ll not stand idly by and let this happen in my own city. Sam says that all might be free if they valued freedom and defended it, as they ought. Shall I not defend my right to freedom?

Titus: (rolling his eyes) If only I could be half as fastidious as you are, Malachi, I may not assume the world and these trying times shall trouble me either. However, I cannot. I shall not. I shall do my part.

Malachi: I did not intend to…

Titus: (waves him off) Say no more of it. I only pray that you shall not think less of me for doing what I must. We must each do as we believe is right in such a time.
Adam: He speaks the truth, Mal. We must look to ourselves to govern our actions.

Malachi: I believe not what I am hearing! (Voice raised) Can you truly say that you must look to your own selves for truth? If mankind is to look to self for truth, pray tell, what happens when we, each man, finds his own truth and such truth does not resemble the truth his neighbor has found? (Looking dumbfounded) We can only look to God for truth! Who’s to say that my truth is above your truth? Nay! I will not agree! For this very reason is why we have war and suffering!

(Titus begins to walk away while shaking his head.)

Malachi: Titus! (Runs to catch up) Do not walk away, brother. Indeed, you and Adam are my brothers in every way that can be – barring blood.

(They stop and pause in quiet. Malachi looks up at the sky and closes his eyes for a moment.)

Malachi: Today is the last of our childhood as we have come to know. No more coon hunts, late night fishing or even brawlin’ over who gets the biggest biscuit. I desire not to spoil such a day. So much of me wishes we could roam these woods with all of the innocence it has provided thus – to never face the injustices of this world and come face-to-face with the men we truly are. I, for one, fear to see my true reflection staring back at me. I know not what I shall find when I’ve the courage to look upon it. I do not think any less of you, Titus, or you, Adam, for being brave enough to gaze upon it and face the truth within.

Adam: You two are startin’ to act like a couple of women. I daresay ‘tis time for me to away! (He grins and punches his friends as they continue to pummel each other and walk off set)