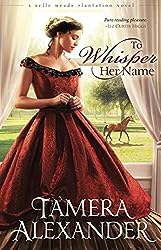 To Whisper Her Name (A Belle Meade Plantation Novel Book 1)

Olivia Aberdeen, destitute widow of a man shot as a traitor to the South, is shunned by proper society and gratefully accepts an invitation from “Aunt” Elizabeth Harding, mistress of Belle Meade Plantation. Expecting to be the Harding’s head housekeeper, Olivia is disillusioned when she learns the real reason Elizabeth’s husband, Confederate General William Giles Harding, agreed to her coming. Not finding the safe haven she expects, Olivia is caught off guard by her feelings for Ridley Adam Cooper, a Southern man who seems anything but a Southern gentleman.

Branded a traitor by some, Ridley Cooper, a Southern son who chose to fight for the Union, is a man desperate to end the war still raging inside him. Determined to learn “the gift” that Belle Meade’s head horse trainer and former slave, Bob Green, possesses, Ridley harbors secrets that threaten both their lives.

As Ridley seeks to make peace within himself for “betraying” the South he loved, Olivia is determined to never be betrayed again.

Bianca Marshal is holding out for the perfect husband. Finding a man that meets the requirements of her “must-have” list in the foothills of the Appalachian Mountains has proven impossible. Bianca’s mama insists that there’s no such thing as a perfect true love, and that Bianca’s ideal man is pure fiction. On the eve of her twenty-fifth birthday, Bianca discovers a devastating statistic: her chance of marrying is now only eighteen percent. Unwilling to accept spinsterhood, Bianca enters an essay contest that propels her into a whirlwind search for her soulmate. Via the opulence of London and the mysteries of the Holy Land, Bianca’s true love will be revealed, but not without a heavy price. 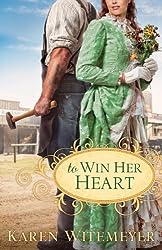 To Win Her Heart

Do They Have a Fighting Chance at Love?

After completing his sentence for the unintentional crime that derailed his youthful plans for fame and fortune, Levi Grant looks to start over in the town of Spencer, Texas. Spencer needs a blacksmith, a trade he learned at his father’s knee, and he needs a place where no one knows his past.

Eden Spencer has sworn off men, choosing instead to devote her time to the lending library she runs in the town her father founded. When a mountain-sized stranger walks through her door and asks to borrow a book, she’s reluctant to trust him. Yet as the mysteries of the town’s new blacksmith unfold, Eden discovers hidden depths in him that tempt her heart.

Eden believes she’s finally found a man of honor and integrity. But when the truth about Levi’s prodigal past comes to light, can this tarnished hero find a way to win back the librarian’s affections?

Elegance and wealth. Privilege and politics. The extravagance of the Butterfly Palace
overwhelmed Lily’s senses and nearly smothered her painful memories. She pushed
away her misgivings . . . She was perfectly safe in this huge house.

Austin, Texas—1904: Abandoned by the love of her life and still mourning the loss of
her mother, Lily Donaldson has turned her back on the pain and come to Austin for a fresh start, working for the Marshall family as a kitchen maid in their luxurious mansion, the Butterfly Palace. The tasks before her are legion, and her mistress less than pleasant, but at least Lily’s new life will be, if nothing
else, distracting.

But one night, while serving at a dinner party, Lily recognizes the man who abandoned
her, Andy, her liaison from the livery stable, the blacksmith’s son . . .
sitting among the distinguished guests. Though he recognizes her, Andy does not
acknowledge her aloud, and Lily is left reeling, flabbergasted, and
irate.

But before she can get an explanation, the path of the Servant Girl Killer swerves
very close to the Butterfly Palace, sowing terror among the maids. Having come
to Austin to start anew, Lily suddenly feels trapped in a spider web. How can
she know who to trust in a house where lies come dressed in fine suits and
deceit in silk gowns the colors of butterfly wings?