Woo Hoo!! I am super excited to face-off with Robin today! This lady is AMAZING!! She has been nominated for over 75 awards and has won 40!!! I usually list them, but it’s just too much!!!

Here are some cheapies that she has: 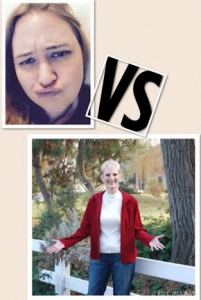 The rules are simple. I ask Robin some random questions. She replies and then I give my answers. Each winning answer is worth one point and I get to decide whose answer is better.

1. What is your biggest phobia?

Robin – By far, it is claustrophobia. Although I have learned to control a threatening panic attack through self-talk and slow breathing, it’s no fun to go through. Years ago, I was in the window seat at the back of the plane when an overweight woman with a toddler lap child sat in the middle seat. I was pressed up against the side of the plane and no hope of getting past her. I was trapped. I envisioned myself jumping up and walking on the heads of passengers like Crocodile Dundee walked on the heads of people waiting for the subway. I didn’t, and thankfully it was only a one hour flight. But it was an awful hour. I’ve booked the aisle seats ever since.

I definitely have a fear of heights. Man, I get dizzy just looking over the ledge of anything off the ground!!! I have always wanted to sky dive though. Go figure…

— I think you win that. I haven’t ever been trapped against the edge of a high building by an overweight woman.

3. Do you need white noise to sleep?

Robin – Yes, although usually I fall asleep to the sound of the TV, and it is my husband who turns on the sound machine after the TV goes off. He likes just regular white noise. I like a mix of streams and waterfall on an app on my iPhone. One very dear friend who I often room with at conferences also likes white noise so we do well as room mates. But another friend roomed with me one night and didn’t sleep a wink all night long because of the noise. Poor dear. I would have turned it off if she’d told me; however, I was blissfully sound asleep. I still laugh when I remember the expression on her face in the morning.

Charity – Ahhh! hahahaha. I like to have noise too. When I fall asleep with noise, I don’t hear other noises that might be made by certain family members. I am the only girl in the house and all the boys are like giant bulls in a china shop. They run into everything. Even my husband. My 6’3” son is the WORST! He hits every single wall.

4. Have you ever gone zip-lining?

Robin – No, but I would do it if the opportunity arose at the right time and place. I’m not afraid of heights and the thrill of a bit of speed can be fun for a short spell. I’ve been para-sailing several times and love being way up high above the water. It is so silent. Amazing. Zip-lining would not be silent because I probably would be squealing the whole time.

Charity – That would be so fun to zip-line with you squealing! hahaha. So funny. I would be too!! If I could do it, I would. Sounds so fun. My Ehlers-Danlos prohibits such events though.

Robin – Embarrassing. I haven’t a clue who any of the 80’s bands were or what songs they sung. Maybe the Jackson Five. Were they in the 80’s? You have to go back a couple more decades for me to be able to name bands and songs with any confidence. By the 80’s my music preference was Contemporary Christian, Praise Music, and Country. I’ve been a fan of George Strait probably for his entire career, and he has been the inspiration for the hero of at least one of my novels.

Charity – Ha! Well, I was a child of the 80’s. The bands were so horrible. I remember loving The New Kids on the Block. My friend and her mom would follow them all over the country, book the same hotel as them, and go to all of their concerts. I thought that was really creepy.

I like George Strait. That movie with him was pretty good! I think it was called Pure Country.

6. Who is the WORST celebrity?

Robin – Oh gracious. I bet I could come up with a long list. I try to keep up with pop culture for the sake of my writing, so I come across a lot of the worst of our culture. For the sake of this question, I guess I’ll go with Kim Kardashian. Because there isn’t a single reason for her to be a celebrity. Not that I can figure out.

Charity – Oh, gosh. You win. I was going to say Justin Bieber, but… Kim and her hubby, Kanye, WIN! They are absolutely horrible.

8. What’s the funniest joke you know?

Robin – A pastor’s wife came home with a fur coat. She is trying it on for her husband while standing in front of the mirror. She says, “I know it is terribly expensive and more than we can afford. But it is so beautiful that I couldn’t resist the temptation.” The pastor says, “Why didn’t you say, ‘Get thee behind me, Satan!?'” And the wife answers, “I did. But he told me it looked just as good from behind as it did from the front.” Ba-da-dum!

Charity – ah! haha. Nice. I don’t even think I should try this. hmm. I honestly can’t come up with anything better than the “Boo Who” knock-knock joke! hahaha

9. If you could meet one person from history (NOT Jesus!!), who would it be?

Robin – Easy question. I would want to meet Abraham Lincoln. I would love to hear him tell me his life story from his perspective and in his own words, from his youth right through to the moment of his death. I would especially want to hear about his campaign for the presidency and about his years as president. Historians can tell us a great deal about people from the past, but getting the facts from “the horse’s mouth” can’t be beat.

Charity – Great choice! I would choose George Washington. I love that man!!!!

10. Do you ACTUALLY have any family member (that you know of) who went West in a covered wagon?

Robin – Not that I know of. I have an ancestor who fought with Andrew Jackson in the War of 1812 so it is likely that there was covered wagon travel, although maybe not on the Oregon Trail. But most of my ancestors that I’ve managed to trace were settled in the midwest (Illinois, Iowa, Wisconsin). Trains already traveled all the way to California by the time my grandparents were born, and that’s how they traveled to that state in the first decade of the 20th Century.

Charity – My Grandma (My Dad’s Mom) traveled west in a wagon train when she was a child. I think that is so amazing!!! History like that seems so far in the past, but it really wasn’t. My own Grandma traveled like that. Blows my mind!

and going on overnight trail rides in my twenties and thirties. But now, those rare times when I get to ride (daughters and granddaughter have the horses now), my best trick is getting on the horse.

Charity – Racing barrels and going on overnight trail rides?!?!?! Woh!! Fancy! I didn’t know you were so talented. That’s really cool. I am really impressed.

Thank you, Robin! I had a blast getting to know you a little better.

Readers, head on over to her website. You will find something pretty cool there! If you haven’t read any of her books and send her the postage, she’ll send you a FREE BOOK! Now that’s a great deal!